Concept of free space: buildings giving the freedom to be

As construction is getting more intense, the ever-increasing number of people are talking about what style of architecture are we going to leave for the future generations. At this year’s Venice Architecture Biennial, the attention was dedicated to a new trend – free space architecture, which encourages to tear down the walls, use the gifts of nature, give the feeling of freedom to a human so that one can feel comfortable and autonomously even in small spaces.

According to the architects, this trend is only taking its first steps in Lithuania, however, the exponentially increasing progress of science and technology opens new possibilities. Life in densely populated areas makes us view the architecture not as the packaging of real estate business, but as a significant part of life with higher requirements. Professor of architecture Gintaras Čaikauskas, the senior architect of construction and sustainable real estate development of “YIT Kausta” Vytautas Janušaitis and an urbanist Martynas Marozas speak about the needs of a modern human and why in the future, maybe, we ourselves will choose to live in dormitories.

Architecture – even as a home aura

According to the professor of architecture Gintaras Čaikauskas, every generation tries to distinctively reflect the current events of their time, declare what is the most important in their lives and sometimes – surpass the everyday life. The architects thought about the connection between the buildings and the environment and sometimes they were able to realise it successfully, sometimes – less successfully.

The direct meaning of the definition of free space was known to the architects from before, but only recently the attempts to raise the public awareness has been made.  In the opinion of the professor, the philosophy of modernism, having denied categorically the traditions of historical styles, have physically unleashed the limits of space. A simple example – a separate kitchen, which has become a part of the sitting-room, created a definition of the common room, expanding the boundaries of communication of people. According to the professor, this decision was determined by the change in lifestyle and the appearance of the new food production technologies.

“The ideas of the current “free space” go even deeper. Not only is their visual or practical effect declared, but the new, less measurable, qualitative characteristics as well. The space “aura”, sensitivity, mood is discussed; even the Eastern definition of “Feng Shui” is used. The effect of the forces of natural disasters is emphasised. In a sense, this direction may be associated with the trends of ecology and all this speaks of higher requirements for the formation of the environment”, - says prof. Gintaras Čaikauskas.

According to him, the society begins to understand architecture not only as the “clothing” of the building, but as a significant part of life, covering both physical and spiritual poles.

From massive stone blocks to a complete freedom of action

The currently loudly expressed concept of “Free space” inspires and encourages seeking for original solutions, but also motivates to reassess the definition of freedom.

“Theoretically speaking, one of the main objectives of construction activity is to create optimal physical conditions for a human being. The building must protect against the cold, heat and provide a sense of a safe and comfortable life. However, recently, the efforts are focused towards providing the human with the emotional sense of freedom, which cannot be limited by partitions and enclosures”, - says the professional of architecture.

Can you match the unmatchable? That, according to the prof. G. Čaikauskas, is the essential intrigue for an artist. Of course, one must feel freely in the vastness of the forest, meadows or sea, but the dangers of fire, flood and storm exist there as well: “My home is my castle”, “my yard is my world” we say. And maybe we would rather live in a limited, but especially secure medium, under the clear spherical domes of the “Eden project” where we would kind of distance ourselves from the world?”.

When asked, if the modern architecture of Vilnius, Kaunas can provide us with the sense of freedom and comfort, G. Čaikauskas points out, that you do not have to be an expert to assess the progress of the last decades in Lithuania. The level of projects and realisation in some fields, allows us to speak, at least carefully, about the trends typical to the whole Europe.

When asked, if the unique style of architecture of our generation can be grasped and what it is, the professor answers: “It is likely, if the artists will be able to turn these hovering ideas to an objective reality, they will remain. This is not an easy task, as it is not nearly clearly formulated. Finally, the objects that withstood the test of time for 50 years are only formally entered to the heritage list. Apparently, only then we will have to return to this subject”.

Home – away from the limits of an apartment

Construction and sustainable real estate development company “YIT Kausta” pays a lot of attention to the new trend of free space. Its senior architect Vytautas Janušaitis says, that the most important task for the architects today is to provide the settlers with the sense of freedom and comfort.

“This is the direction we are heading to. Discussions are taking place, we involve the society, carry out surveys regularly to find out about the change in needs. The designing of buildings and the elements of comfort installed in them are determined by the needs of the people that we have to “catch” and adapt to”, - says V. Janušaitis.

According to the architect, we may observe a trend that today the blocks of residential housing are designed in such a way where the building and the human would not be limited by the surrounding environment.

“As new buildings are integrated to the surrounding environment, as the remaining old buildings and their fragments are given new life, so do the elements of nature and the history of the area itself, determines the success of the project today. The connection with the environment and the surrounding space is increasingly important and has become significant qualitative criteria”, - explains V. Janušaitis and gives the example of the project currently under development “I see Vilnius” (orig. “Matau Vilnių”).  Various elements that were in the old building will be preserved during the execution of the construction at the former brewery territory - the plaster mural painting by M. Daškova, stained glass and the history of the area is examined together with a professional guide by collecting archive information.

“People wish to live not only at a good place, but also at the environment holding a certain history and to become the part of it, the successors. Today, homes usually extend much further than the boundaries of an actual apartment, because home is the yard, the street where I live, the square nearby where I come to take a walk with my children and my dog”, - says the architect.

People themselves inspire for architectural solutions

Free planning of premises, connection with nature, terraces, sliding doors, French windows, visually expanding the apartment to the outside – all these elements rising in popularity belong to the concept of free space.

“Modern day design solutions allow to reach such a sense that you can feel as if you were at the embrace of nature, city and not in closed premises. New technological capabilities allow us to take this step forward”, - says the architect of “YIT Kausta”.

When asked, how he assesses the new trend from the professional side, V, Janušaitis was pleased to say that not only the architects are pushing the concept of free spaces forward, but the people themselves and their needs are too.

“It all depends on where the project is developed – on what area, at which part of the city. In the natural environment this is done unconditionally, and this pleases us, the architects, as much as the citizens themselves, because the need for the sense of freedom is increasing. However, in a densely urbanistic populated area, for example, in the old town, the sense of free space needs to be achieved through different measures. We try our best, so that one can rest from emotional stress, feel autonomous at home”, - spoke the architect.

The specialist of urban planning, expert of public involvement processes Martynas Marozas, says that he admires the architectural companies, which exploit the context of place in their projects and allow the buildings to expand or to shrink, depending on the seasonality and the needs of the building. He welcomes the fact that the space between separate buildings and parts of them are being erased. To not only use the designed spaces, but to see the context, exploit its given advantages is a completely logical solution, necessary for a modern human being.

“We live in a dense environment more and more. The amount of space that we can afford to buy with money constantly decreases. For example, a new apartment in Vilnius has decreased from 60 sq. m. to 40 sq. m. The houses are becoming smaller, but our physical parameters are not. Various trends appear under such conditions, helping the objects adapt to the environment better, - debates the urbanist. – At the same time, the assumption for sharing economy appears. Today we have our own washing machine, a kitchen, but a time may come, when we will want to return to the dormitories”.

According to him, today, in Holland, Belgium there are many examples, when for example, a community of 8 families builds one house where they share the common premises – store rooms, storage for keeping bicycles, laundry rooms, etc. Better use of space allowed saving such an amount of costs that the community was able to install a swimming pool.

In his opinion, the architecture of free space is not yet established in Lithuania. However, there are currently a few projects under development, designed for young professionals, who travel a lot, do not spend a lot of time at home, are not making home cooked food, who do not need that much of space. This is a property that does not encourage settling, if one does not desire it.

“Trying to erase the limits and rethinking about how much we really need them, is progressive and, in some cases, might improve our quality of life. This is a topic we will be covering more and more”, - M. Marozas summarises. 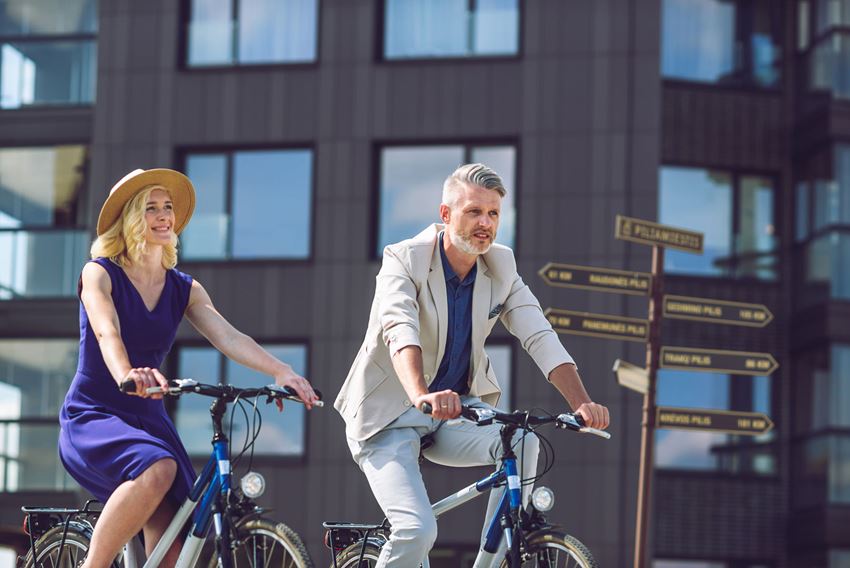 Sustainability in construction – why is it important to build the buildings of the future today? 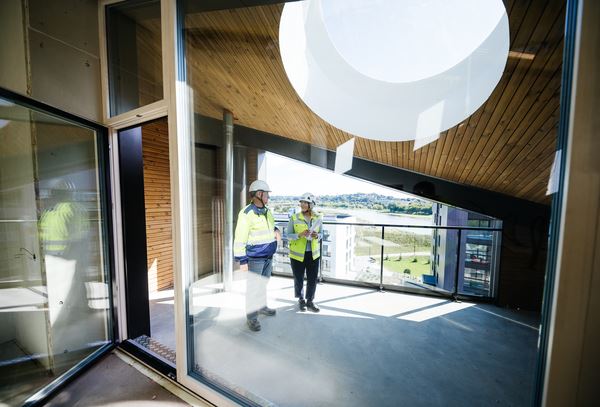 Survey: bank loan or down payment does not scare people – the hardest part is about choosing a home 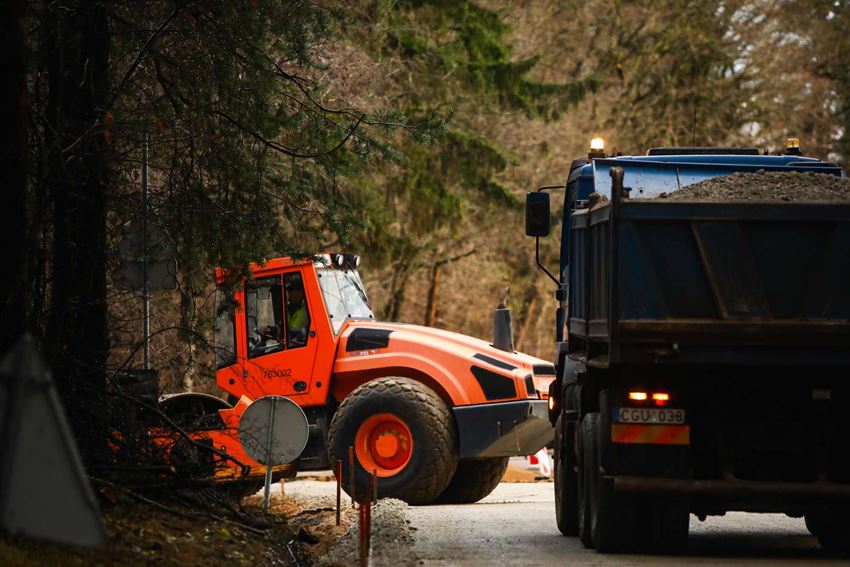