Two new A+ energy class business centers will be erected in rapidly expanding Šnipiškės micro district in the next few years. Office buildings that are being built by sustainable urban development company 'YIT Lietuva' on the Žalgirio and Linkmenų streets will add over 13,000 square meters area to the capital's commercial real estate market.

Both business centers are a part of a major urban project 'Naujasis Skansenas'. Construction of residential houses with commercial premises have started on January in a 3.41 ha territory. Large multifunctional district, which will significantly renew the face of Šnipiškės, is expected to be completed by the end of 2025.

Construction of the first office building on Žalgirio str. is expected to be completed by the end of 2021. Its leased premises will cover over 7,000 sq. m. The second, nearly 6,000 sq. m. business center will be built nearby on Linkmenų street. Its construction is expected to start next year. Both buildings were entrusted to be designed by 'Vilniaus architektūros studija'.

According to Kęstutis Vanagas, managing director of 'YIT Lietuva', Šnipiškės micro district, which formerly was one of the most unused places in the capital, will change significantly in near future.

'Linkmenų and Žalgirio streets are experiencing a real revival due to their strategically convenient location. On these streets and nearby business and shopping centers are being established, service and transport infrastructure is being developed. In this part of the city, we set ourselves the goal to implement conversion of a large area and create a modern district with business and residential premises that meets the latest requirements. It’s kind of the city in the city vision, idea of which is to provide the opportunity to work and live near the city center, avoiding daily traffic jams, where everything can be reached within a walking distance', says K. Vanagas.

Both 5-storey office buildings will have parking spaces for bicycles, charging stations for electric vehicles and underground car park. About 10 percent of parking spaces will be intended for electric vehicles with charging points. Business centers with A+ energy efficiency are built in compliance with BREEAM Sustainable Buildings Certificate requirements and will incorporate a range of environmentally friendly and energy efficient solutions.

Business centers - integrated into the district, but separated from it

According to Algimantas Pliučas and Daiva Pauliukonienė, architects of 'Vilniaus architektūros studija', who carried out the designing work, the needs of the whole district were taken into account while planning the buildings, together becoming part of already existing architectural context in Šnipiškės.

In compliance with environmental requirements, buildings in this part of the city can be up to 5 story’s high, so the first building 'Naujasis Skansenas Ž', that will be located on Žalgirio str. 112, was designed according to the concept of a horizontal skyscraper. Commercial area at the bottom of the building is horizontally separated and the upper four office floors are separated by a horizontal window division. Not only have the efforts been made to meet sustainability requirements, but, with a possibility available, exceed them, so that is why the building has eight times more parking spaces for bicycles than it was assigned.

“Without forgetting the commercial purpose of the building, it must remain practical, rational for employers and attractive to employees. Therefore, in the middle of the building, two non-connecting courtyards, which rise up through the entire height of the building, are intended to be installed. Here employees from the ground-floor offices will be able to work, have lunch or take a break from work', says Žalgirio str. business center's architect Algimantas Pliučas.

Building stands out for its large floor space of almost 2000 sq. m. and it can therefore be attractive to big companies. There is also a possibility for companies to install a terrace on the roof. 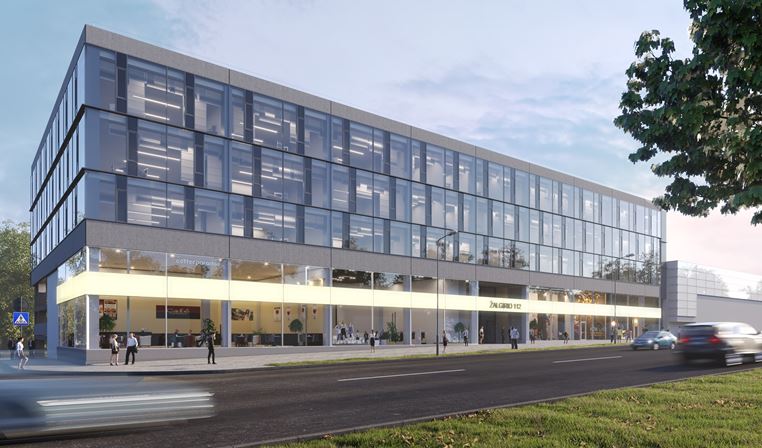 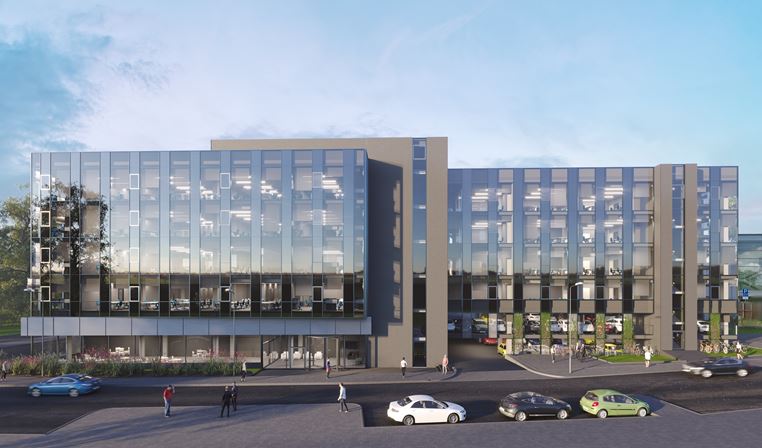 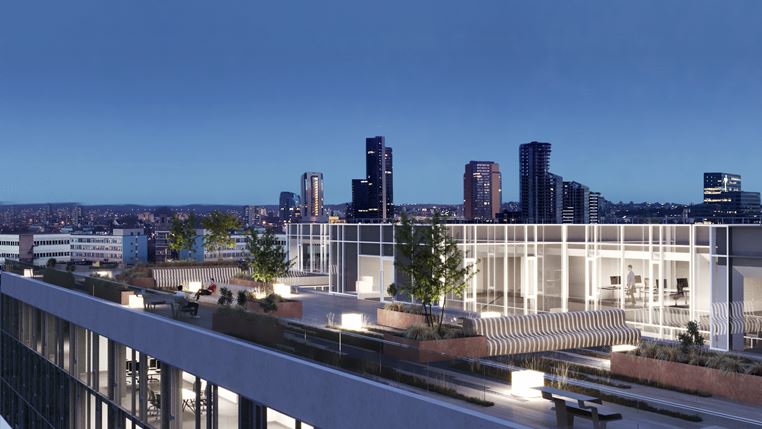