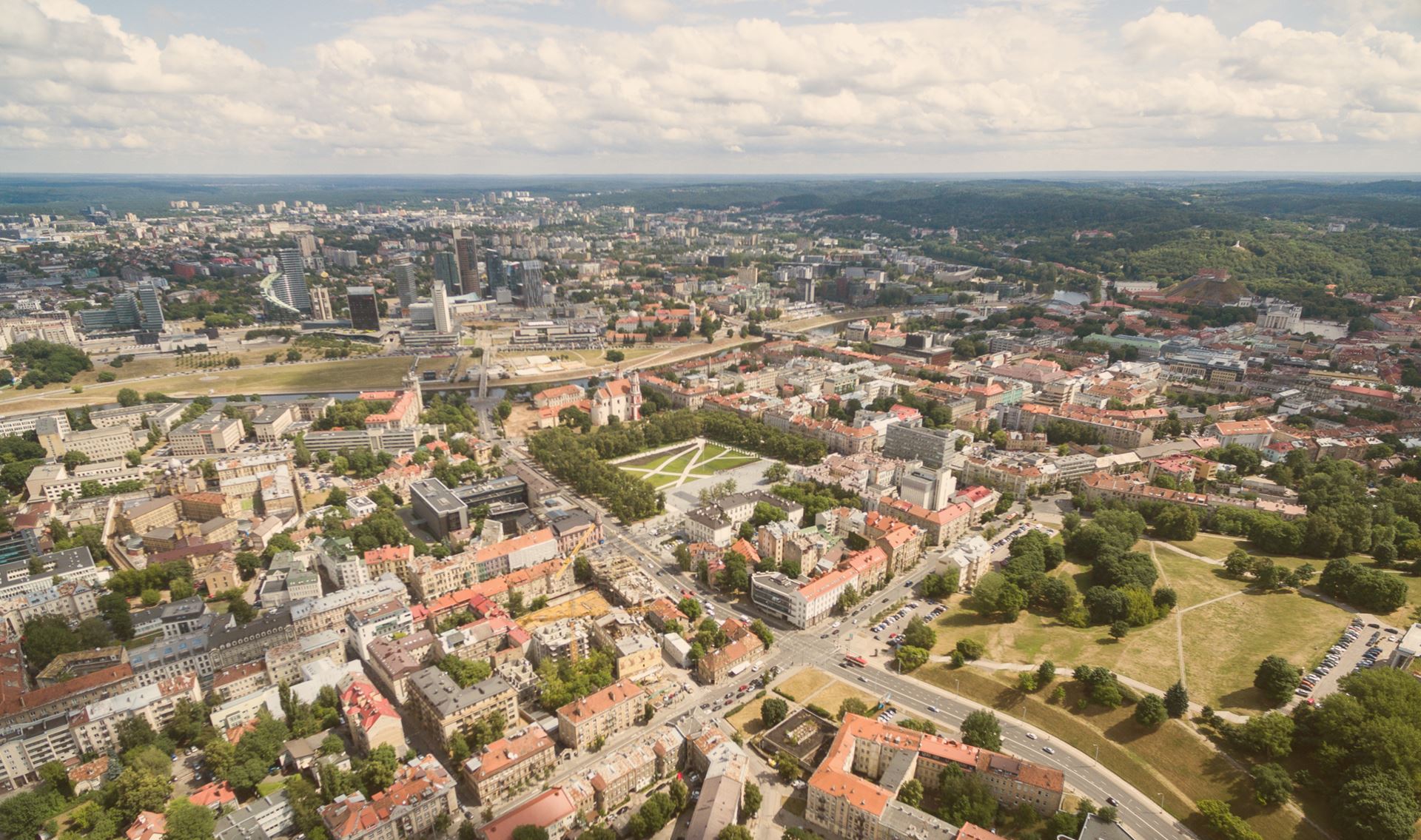 A city of new opportunities and inspiration. Modern and forward-looking capital, though full of traces and signs of history. And all of this is Vilnius. Life here is constantly accompanied by the stories linking the past of the place and its present as well as full of opportunities to continue them.

The part of Vilnius located between Neris, Tauras Hill and Lukiškės was always unique. It is a place of the beginning of the expansion and growth of Vilnius. The territory that was once a suburb of the capital now became the place of the centre of Vilnius inherent to the urban landscape. It’s namely here that the capital opens up the panoramas of its stories to the residents of the houses of “Matau Vilnių”.

Lukiškės – from the suburbs to the centre Today Lukiškės is the heart of the city, inherent to the square beloved by Vilnius residents. And yet, Lukiškės welcomed the end of the 18th c. more as the suburb of Vilnius than the urbanised part of the city. The embankment of Neris surrounding the current Lukiškės Square was initially known as a storage place for grain and wood, later on sawmills were established here, and once the St. George avenue (now Gediminas avenue) has been laid, it was the place for the city market. Nowadays the industry has given up the spaces of Lukiškės for the spaces of leisure and service, which are virtually within arm's reach from the houses of “Matau Vilnių”. The life of Lukiškės constantly expanded from the river towards Tauras Hill and current Aludarių ir Pakalnės streets. Nobel laureate Czesław Miłosz lived part of the time namely in the latter street.

Block of Tanners and Business Centres

The riverbank of Neris at Lukiškės have been friendly to the craftsmen and businesses from the very ancient times. Leather processing companies established here at the end of the 19th c. Under the decision of the contemporary government they had been moved from Tymas block in Užupis to this place of Vilnius. This is how the block of tanners has established in the areas of the current Goštauto and Jasinskio streets, which had influenced the development of this part of the capital up to the middle of the 20th c.

At least 13 leather workshops used to operate at the riverbank of Neris in 1891, which is now built-up with modern business centres. Today it is one of the economic centres of Vilnius, where the administrative building “Victoria” by its name still reminds of a children's shoe factory that used to operate here.

The houses of “Matau Vilnių“ are established in the territory, where the brewery formerly named “Šopenas” then “Tauras” had been operating for decades. Its history has begun in 1859, when a merchant Abraomas Karasikas bought a land plot in Lukiškės from the noblemen Plavinskiai, and built a brick brewery and a residential house there. The brewery was taken over by Vilhelmas Šopenas after a decade, by the name of whom the brewery has been known until 1944, when it was given a new name of “Tauras”. “Šopen” bear was famous worldwide at the beginning of the 20th c. – it won extremely honourable GRAND PRIX Award and Gold Medal in the exhibition of Paris in 1904 as well as was given great evaluation in the fairs of Chicago, Rostov and St. Petersburg.

A legendary beer restaurant “Tauro ragas” was established in a building of unique brutal architecture near the brewery in 1974. A unique weather vane still flaunting here has been showing the cardinal directions since 1860.

Tauras Hill – a place for the home of the Nation

A number of Vilnius residents used to believe that the beer was coming through the pipes to the taps of the restaurant “Tauro ragas” directly from the nearby brewery. Even though that wasn’t true, the beer restaurant was extremely popular among the city residents. The building of unique architecture held a restaurant with even 140 seats, open terrace on the first floor with 90 seats as well as the bar with 180 seats and a banquet hall with 40 seats with a separate entrance in the basement. This structure used to be a pride of modernism architecture of Vilnius in its time, reminding of the late works of Le Corbusier as well as the architectural examples of Mies van der Rohe.

The building of the restaurant was designed and built for a temporary use; however, it remained one of the main entertainment places in the city for several decades. Even though “Tauro ragas” now is only in the memories of the older generation of Vilnius residents, there are plenty of restaurants, cafés and bars around it for everyone's taste.

Tauras Hill – a place for the home of the Nation

Tauras or also known as Vaiduoklių Hill – Pamėnkalnis – has always been one of the brightest accents of Vilnius landscape. According to the archaeologists, pagan celebrations have been held here since the very ancient times. It’s no coincidence that the most prominent figures in the country – M. K. Čiurlionis, J. Basanavičius and others – suggested an idea to build the home of the Nation – the centre of the culture of all Lithuania – on Tauras Hill. Even though the idea to establish the home of the Nation has not been implemented, a monumental stone unveiled on the hill in 2007 still reminds of it.

An example of the modernism architecture welcomes everyone getting up along V. Kudirkos Street from Lukiškės. The building of the Institute of Agricultural Economics and Computing Centre of original complex forms was designed by one of the best Lithuanian architects of the 20th c. - Edmundas Čekanauskas. The task for the architect was not the easiest one – to match the building to the complex and narrow slope terrain as well as busy street. He handled the task perfectly, and one of the most interesting structures of the modernism architecture in Vilnius is currently included into the Register of Cultural Properties of the Republic of Lithuania.

Unique interior decorations – wall painting fresco “Mūsų kraštas” of 240 sq. m., included into the list of the Cultural Heritage Properties, and stained-glasses of the painter Algirdas Dovydėnas – still “hide” in this building. Vingis Park beloved by Vilnius residents is in the neighbourhood of the houses of “Matau Vilnių“ as well. The manor of the Voivode of Vilnius Mikalojus Radvila Juodasis used to stand in the territory known then as the woods of Lukiškės at the beginning of the 16th c. Later on the Calvinists and Jesuits had settled there as well as there was a summer house of Russian Tsar Alexander I in different periods. Summer Kurhaus was established in Vingis Park in the middle of the 19th c. A wooden pavilion and outbuildings were built here, a park was planted, the lime-tree alley was planted on the slope of the manor place, and dance evenings and performances used to be held which attracted crowds of people. Vingis Park acquired the appearance as it is today only in 1965, when the open stage (Estrada) was constructed there. Currently it is one of the most popular leisure and recreation places in the city, which can be accessed by the old streets rising up through Taurakalnis or going along Liubartas Bridge through the cosy block Žvėrynas.